Patience is a virtue. Especially In photography.

This evening I had an event to attend in southern Chester County, about an hour from home. I decided to make a day of it and drive down to the Conowingo Dam in Maryland. After several false starts in getting out of the house (including realizing I had forgotten my tripod), I made it down to the dam about half past noon. The day was overcast – perfect for photography (no harsh light to deal with). I parked and – having never been to this location before – got out of my car and walked through the park at the base of the dam to look for what to shoot.

The Conowingo Dam is located on the Susquehanna River where US 1 crosses – the top of the dam, in fact, is the road surface for US 1. The dam is also a hydroelectric generation station, so there’s a lot of large electrical equipment there. The dam prevents fish from heading upriver, resulting in a large congregation of fish at the base of the dam. This attracts fishers, both of the human and avian variety.

As I walked along the riverbank just beneath the dam, I noticed that there were a lot of cormorants flying in and swimming against the current at the base of the dam. I decided that this might be an interesting shot, so I went back to the car and got my equipment. After shooting some shots along the river, I made my way back to where I had decided to shoot from. As I was setting up the tripod, I noticed something I hadn’t before: there were fish jumping out of the water. Suddenly, my desired shot changed from the cormorants to a fish jumping out of the water.

Once I was set up and lining up my shot, I noticed a bald eagle on the rocks across the river. Once again my desired shot changed; not totally this time, but it now had an extra layer: get a shot of a fish jumping out of the water in front of the bald eagle.

This was an easy shot to envision. It was not an easy shot to get. It took sitting behind my camera for an hour, staring across the water and snapping a picture anytime a fish came close to jumping in the frame of the shot. Finally, though, I managed it. Is it exactly what I was looking for? No, not really – the eagle is looking away from the camera. But the fish is framed inside the water of the river, and the eagle is in focus with cormorants on the rocks in front to provide an extra layer of interest. So I’ll take the shot I got.

And anyway, it was time for me to head off to my event, so I packed up and went on my way. Perhaps I’ll be back; the fish aren’t going anywhere, and neither are the birds. 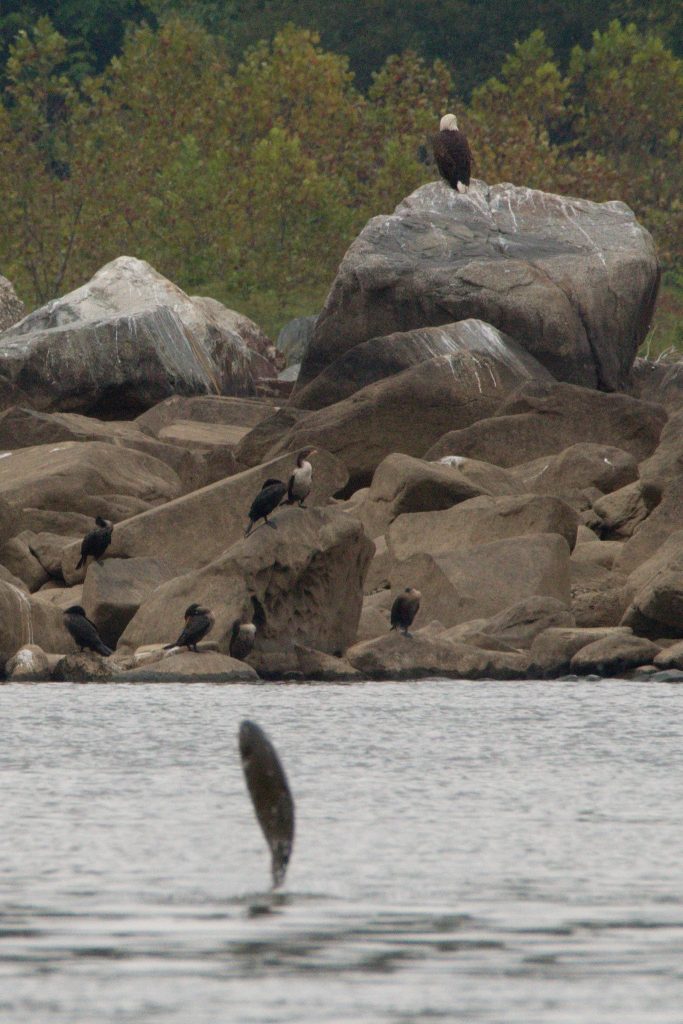