I’m a sucker for bad photos.

No, I don’t mean that I actually like bad photos. But I get suckered into taking them. Even when I know the photo will turn out bad, I still press the shutter button.

What makes a bad photo? Poor lighting is one thing, but the photos I generally talk about here are bad because they are empty stages. A good photograph should capture a moment in time, something that can’t be repeated. A tender expression; an exciting play at the plate; the Loch Ness Monster, Bigfoot, and Jackie Onassis standing in a forest clearing – these are all fleeting moments that can make for a good photograph. (You also need to add in good lighting and good composition, but that’s not the point here. And, yes, still life photography is a thing, but also is not the point.)

But I’m a sucker for photographs of big, empty landscapes. They don’t change (not on human timescales, at least). Take, for example the photograph of the Sachs Bridge in Gettysburg. This was taken in November of 2016, but really, it could have been taken most any time. There’s not a moment here.

Does the photograph have its uses? Yes, it does. It was part of a photo essay on a trip to Gettysburg, and it basically served as filler – showing what was going on without real regard to the quality of the photograph (the real payoff of that particular day was the image of the moon hanging over the Abraham Trostle farm). The bridge was an interesting point of the journey – not only am I also a sucker for covered bridges, this one is rumored to be haunted – and so it made sense in the narrative of the day. However, if this were for a professional photo essay, I would have waited until the sun was right, and waited yet more for something to happen – a duck in the creek, a person looking over the stone wall, something – anything, really – to breathe a moment of life into the static bridge. But this was a day trip, I didn’t have that sort of time, and so I took a picture of the bridge and moved on.

Of course, the bridge itself was the main focus point of the photo, and compositions like this often work in paintings; the static nature of the subject is not a drawback. So, the question is: can I rescue this photo? Can I make it into something interesting? Basically, can I turn it into a painting?

Certainly, there are various Instagram and Photoshop filters that will do that for you. But that’s not what I’m going for here; those wind up being weird imitations – not quite photos, not quite paintings, but somewhere in the middle. The human element is lost.

One solution is to turn the photo into a black-and-white photograph. Black-and-white photography solves this problem in two ways. First, it really covers up bad lighting issues. Second, and this is weird, static vistas like this are just more acceptable in black-and-white. Perhaps it’s because we associate that with older images, from when cameras were not as fast and as capable of capturing fleeting moments. Look at the work of Ansel Adams; I doubt that his photographs would be quite as iconic in color. Somehow, color removes the drama. So, I made the photo black-and-white. But I liked the color. 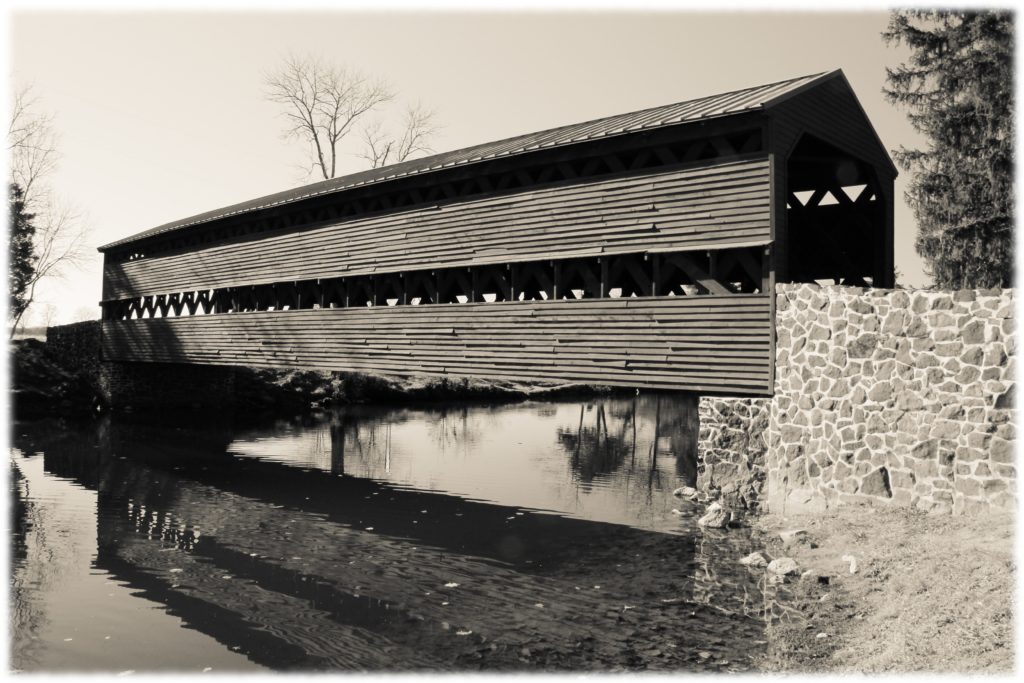 In the mid-to-late 19th century, hand-tinting of photographs was popular. Because color photography was not viable yet, you either had a black-and-white photograph or had someone hand-tint it, to add some color back in. Somewhere in early family photographs, my father has a few that are hand-tinted.

So I taught myself watercolor painting. 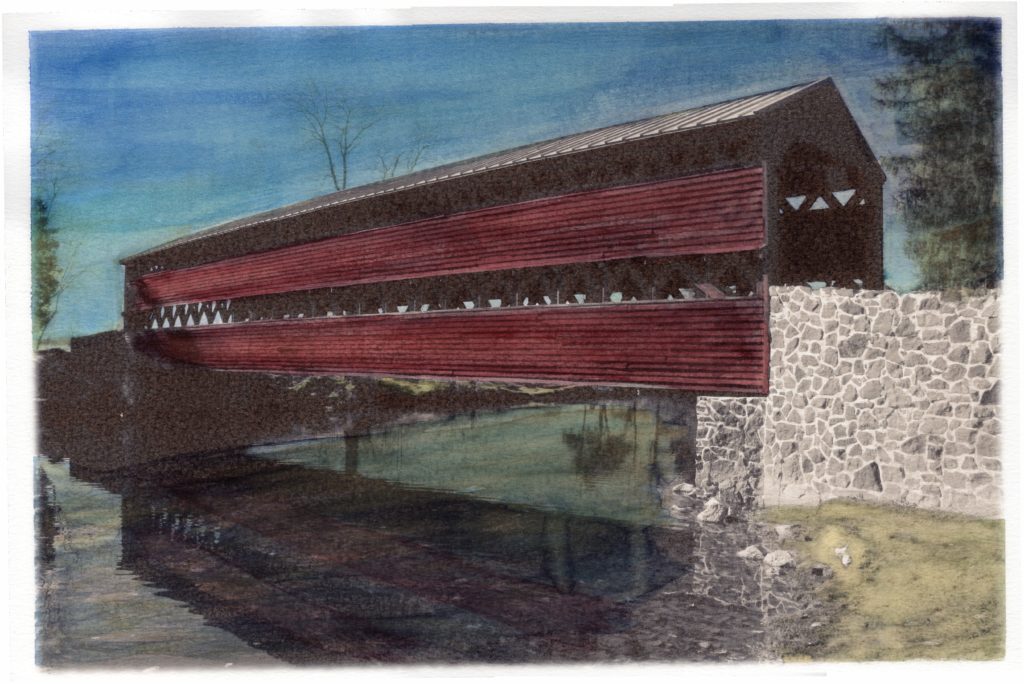 Which means I will have to do more of these. Probably more covered bridges, at least to start.

Because I’m also a sucker for covered bridges.